What an enormous privilege to have the opportunity to pray for you, as reader of TIHM's Prayer Letter. It is my prayer that God will bless you with His Grace during this day and the week to come...

What an enormous privilege to have the opportunity to pray for you, as reader of TIHM’s Prayer Letter. It is my prayer that God will bless you with His Grace during this day and the week to come.

Since our previous Prayer Letter,we had the opportunity to conduct at least 31 group presentations to Industries, Schools, Farm Workers, and Communities through different media, like the film ‘JESUS’, and other. In total we exposed more than 4,890 people to the Good News of Jesus Christ.

Please scroll down to see 14 photos with subscripts about the latest outreaches that explain the whole story.

Apart from many, here follows only three latest ‘war stories’:

On the morning of October 11th, Pastor Raoul Moses from Ladismith invited me to the Secondary School. The principal, Mr Eli, welcomed us in a small hall, filled with 45 Grade 12 pupils, as well as all the teachers of the school.

This social meeting was the last hour of school for the matrics. It was my privilege to give the last message before they were sent into the world as young adolescents.

I told them that my message has the possibility to change their whole world and that things will never be the same again. 2 Corinthians 5:17 (NLT) clearly states: “…anyone who belongs to Christ has become a new person. The old life is gone; a new life has begun! “ At the end of a beautiful story with evangelism as focus, I gave them the opportunity to pray and ask Jesus Christ to take control of their lives.

When I started praying sentence by sentence, the whole group and their teachers prayed together aloud, in order to receive Jesus Christ as their Saviour and Lord.

After this, the headmaster gave me more time to do “Assurance of Salvation” and “Spiritual Breathing”. (Confession of sin in order to be able to live a victorious life as Christian when the going gets tough.)

On October 23rd, a few hours before the JESUS ​​Film show, our planned venue was moved by the authorities from a community hall in Nkqbela (in the black township), to Callie de Wet Sport Center, (very far away from any houses and on the other side of the highway). Barry and I commented that tonight we’re probably going to be the only two at the show because of a wrongly situated venue.

When we arrived that evening, there were two vehicles full of Christian Gap-Year students from the Netherlands and Germany. Also some pastors and congregation members of the area.

Soon after the film started, I noticed some disruption at the hall’s door, where about 15 teenage girls were debating whether to enter and attend or not. I convinced them to attend and have an opportunity to changed lives.

At the crucifixion scene I usually stop the movie to explain shortly what exactly is happening on the screen:

“Jesus is now dying for our sins. Every drop of blood is part of His love for you and me. He could have called millions of angels to destroy all mankind, but He does not. He pays for our sins so that we can live with Him forever. I’m going to give you an opportunity at the end of the movie to invite this Jesus into your lives. According to Revelation 3:20, Jesus is now knocking at your heart’s door. When you open, He will come in and you will become His child. All your sins will be forgiven, and you will receive eternal life.”

Just after the film started again, the 15 girls got up in unity and walked out of the hall in a long row.

I was very disappointed and sad, stood up and challenged the group of Gap-Year ladies students: “What are you waiting for? Stand up, go out and catch those girls and bring them back in order to receive Jesus in their lives tonight.”

The one lady looked at me with big eyes (as this assignment is outside their frame of reference). She asked: “Do you want us to stand up, go out, catch those girls and bring them back?”

So they also walked out in a long line through the door while the film rolls with Jesus in conversation with the two robbers on either side of Him.

After about 2 minutes a long line of ladies enters from the outside: Each student hand in hand with a girl in front and behind her.

Five minutes later, at the end of the show during my invitation message, I noticed the girls are starting to get awfully restless. I reprimand them: “Please sit still, leave the one next to you and listen to me. Look me in the eyes, and concentrate on my words. Now is the time to receive Jesus Christ as your Savior and Lord! “

As we prayed, everyone, including those girls, prayed out loud to give Jesus a chance in their lives.

We suspected these girls were involved in prostitution, with the Sport Center a good source of getting customers in the evenings. PRAY THAT THE HOLY SPIRIT WILL CONTINUE TO LET THE SPIRITUAL SEED GROW IN THEIR HEARTS.

What an incredible victory of LIGHT over Darkness – Praise the Lord!

October 24th, one day after the episode with the ‘prostitute’ girls where we experienced victory over the forces of darkness, only 40 people finally showed up. Among them were quite a few rough-looking men. One old man kept on talking while the film was rolling – much to the annoyance of everyone in the hall.

Many teenage girls between the ages of twelve and twenty were leaving the hall in groups in fear of those rough-looking men.

Not even one of the previous night’s pastors, congregation, or even the Gap Year Students showed up. Barry and I were completely alone and exposed to God’s protection and grace.

That evening 20:10am only 17 of these men were still left in the hall. Everyone else had got up and left in anticipation that things could go wrong tonight.

Above all expectations, at the end of the evening, 22 of them prayed out loud and enthusiastically to invite Jesus into their lives. Unfortunately the girls did not return.

Believe me, those men are the men of the dark roads, pushed out of life over many years. People with ruined lives who were given an opportunity to experience God’s Love and Forgiveness in their lives.

A wonderful testimony indeed of the Power of God!

Second follow-up visit to Kokkie's farm in Piketberg. We used five Follow-Up films (shot in Uganda), to once again underline the basic foundation of the Christian life. We also had the privilege of teaching Gary Chapman's book on The Five Love Languages. 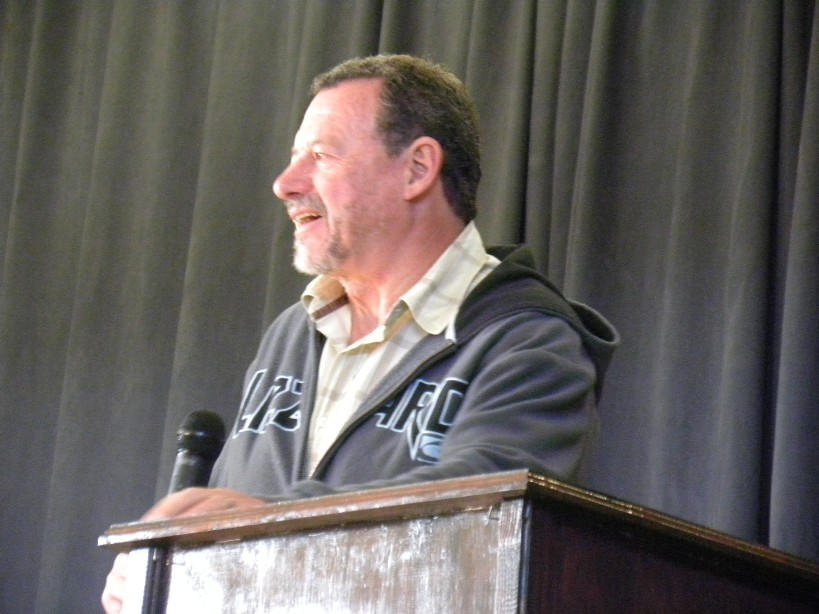 Pieter communicates Christian truths at Blompark Primary School in Gansbaai. The children enjoyed every moment and were enthralled by the message. 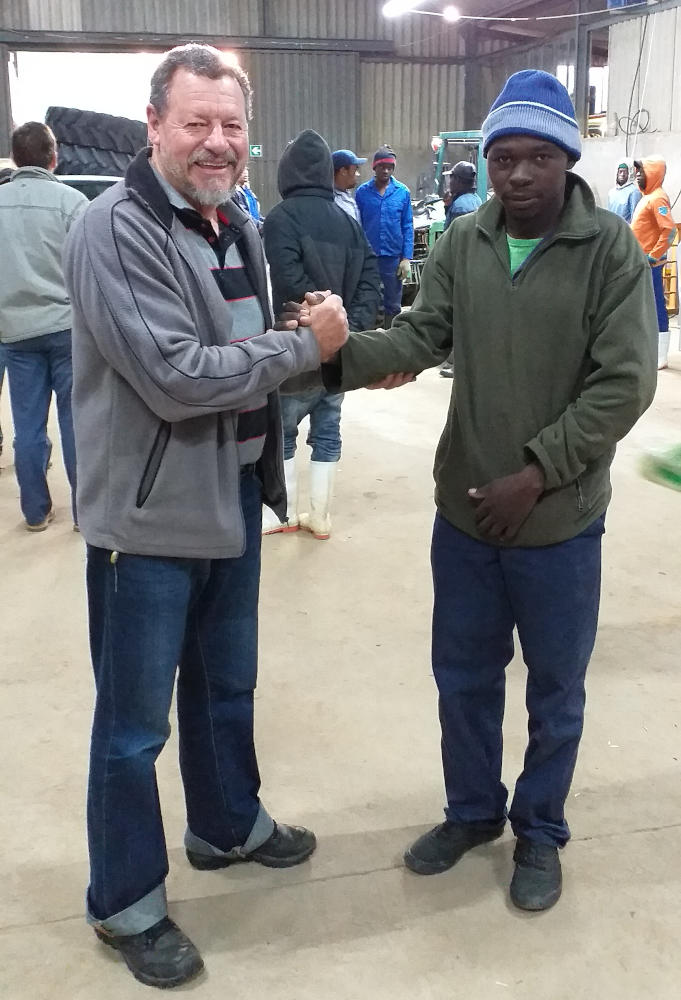 After the evening's proceedings, this man gratefully shook Pieter’s hand and testified that his whole life underwent a turnaround during these six sessions over the three days of the outreach. 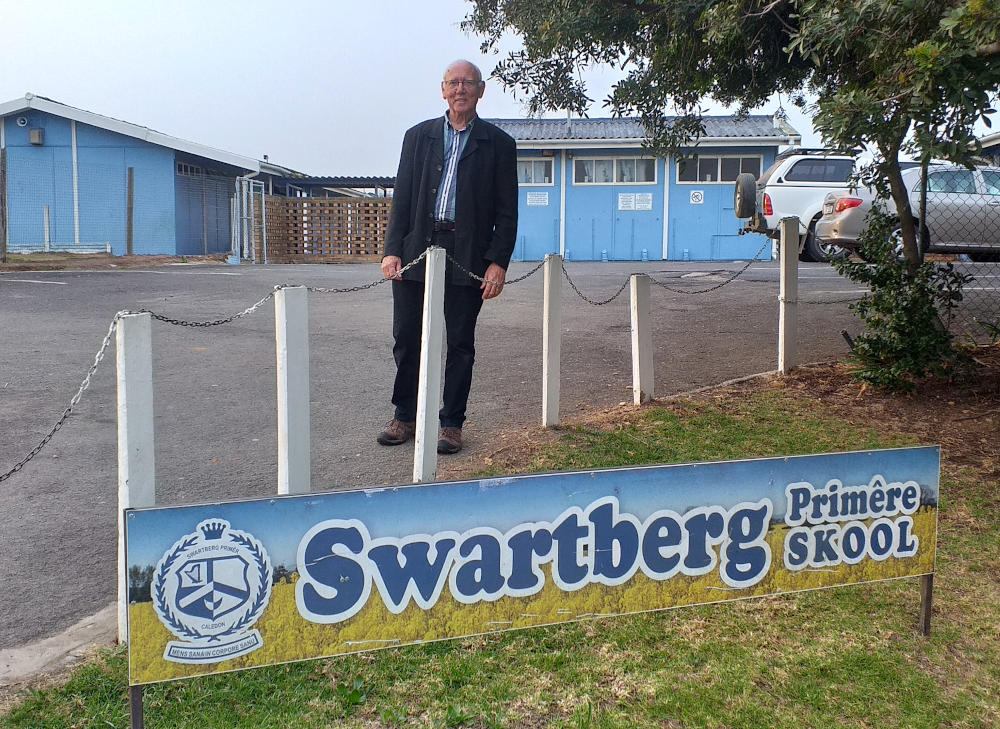 My faithful friend, Barry de Vaal from Pearly Beach, who is always willing to go along and contribute his part. Without him, I cannot continue with this blessed ministry.

Steynville Secondary School in Piketberg. Enthusiastic learners give Jesus Christ a chance in their lives. 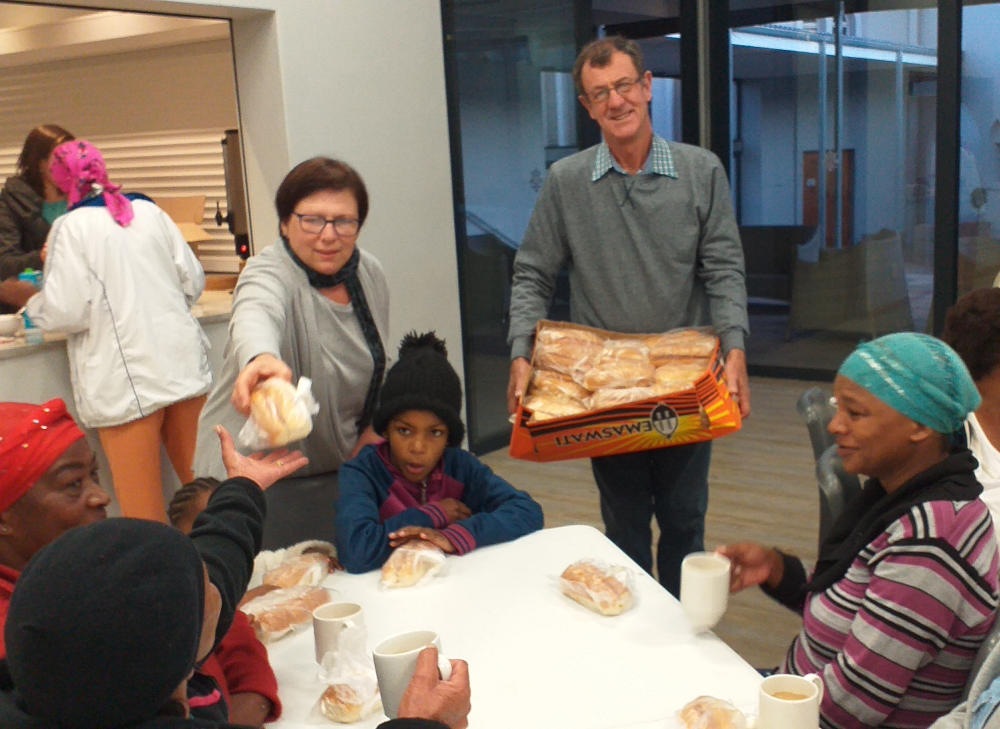 During an outreach in Caledon the farmers provided sufficient food for everyone during the three consecutive nights of the event. 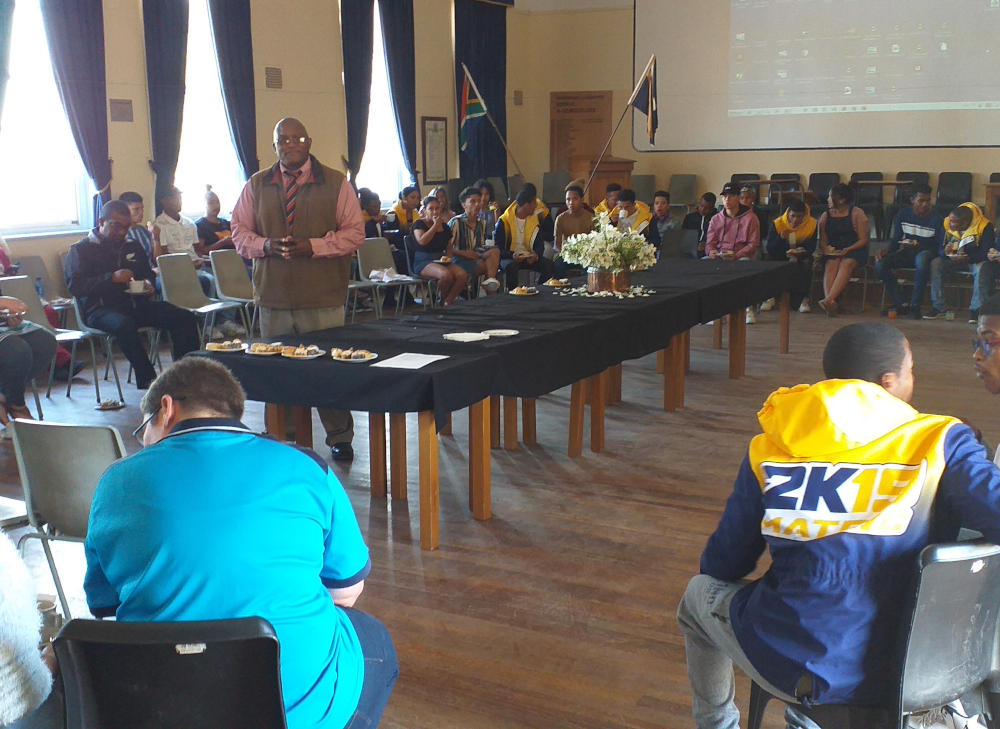 Forty five Grade 12 pupils and their teachers. This social meeting was the last hour of school for those matrics. It was my privilege to give a last message before they go into the world as young adolescents. Also here, all of them, including the teachers, reacted positively. 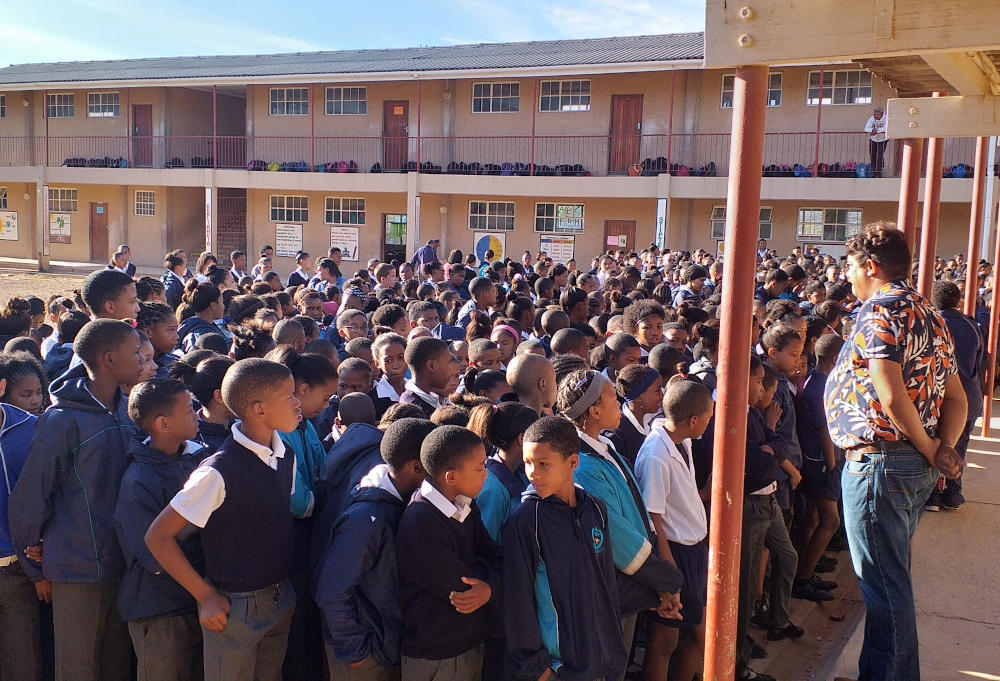 Towerkop Ladysmith, where I had the privilege to do the opening session during the morning’s meeting. The teacher introduces me to the learners. 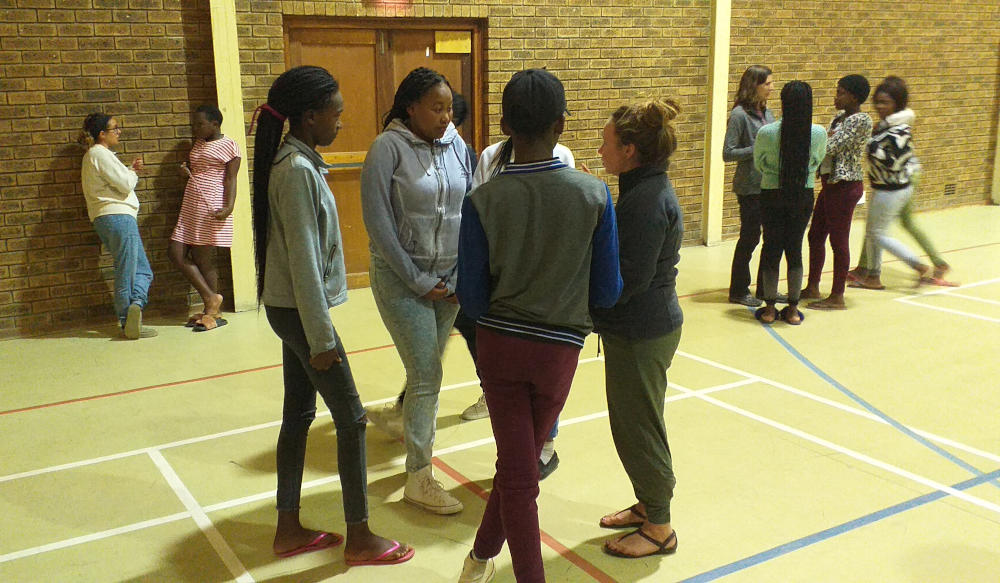 Gap-Year students from Netherland and Germany helped with Follow-Up after the evening’s activities, communicating Assurance of Salvation and pray for the road ahead. 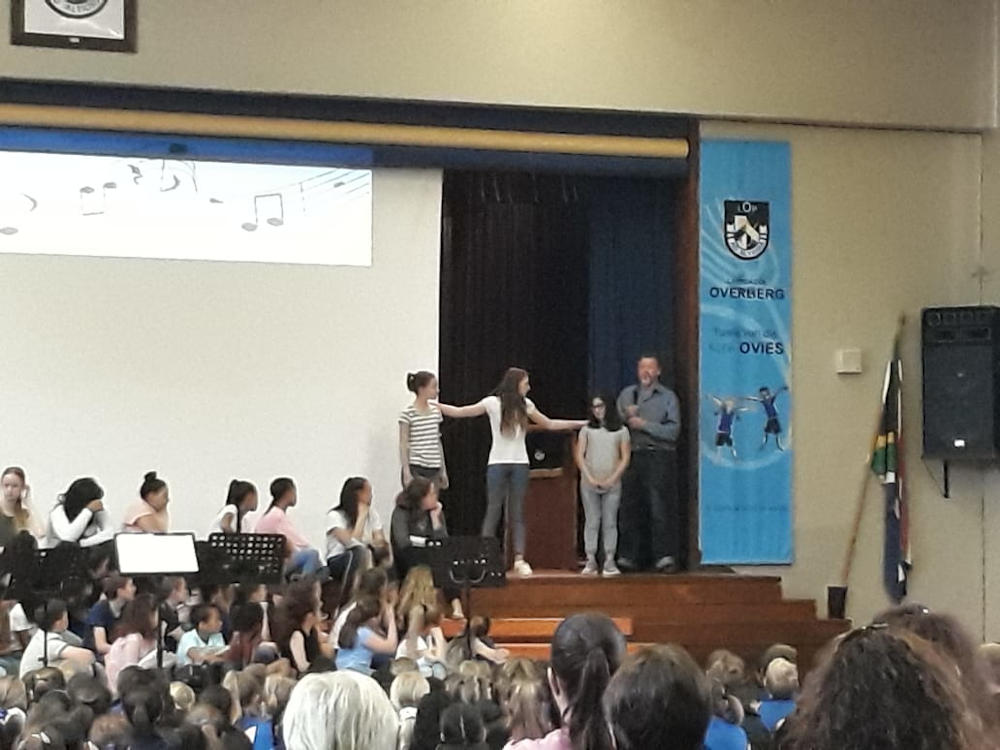 At Robertson Primary School I made use of a practical example to demonstrate how Jesus on the Cross bridged the divide of separation between Man and God because of sin. 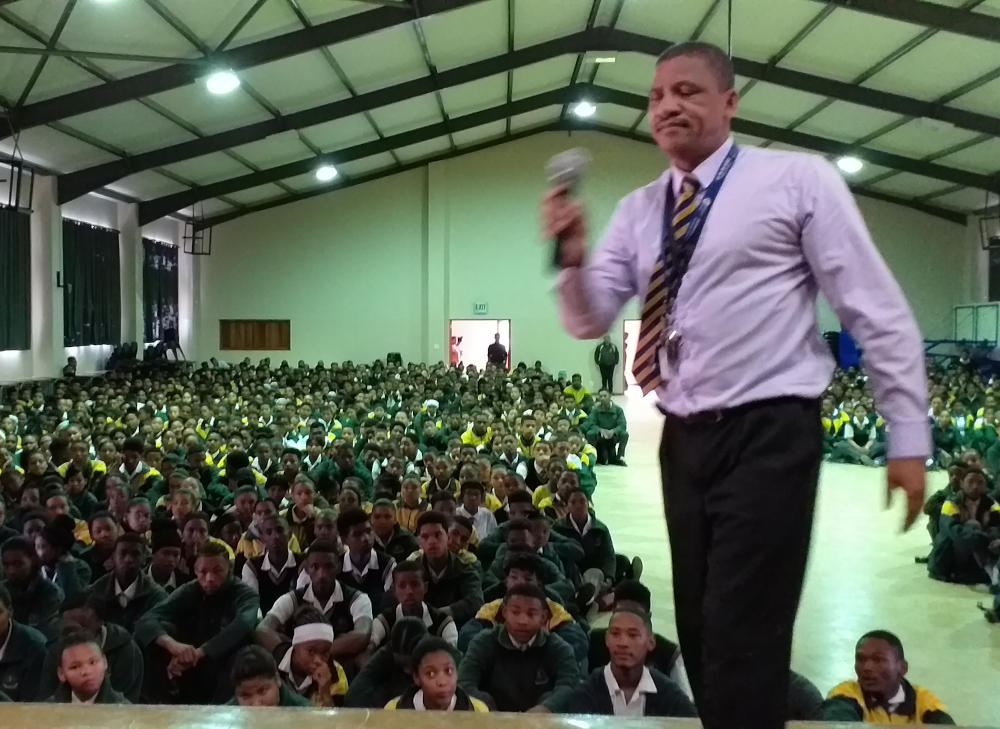 At Robertson Langeberg Secondary School the teacher hands me the mike to address a hall of eagerly, waiting learners. 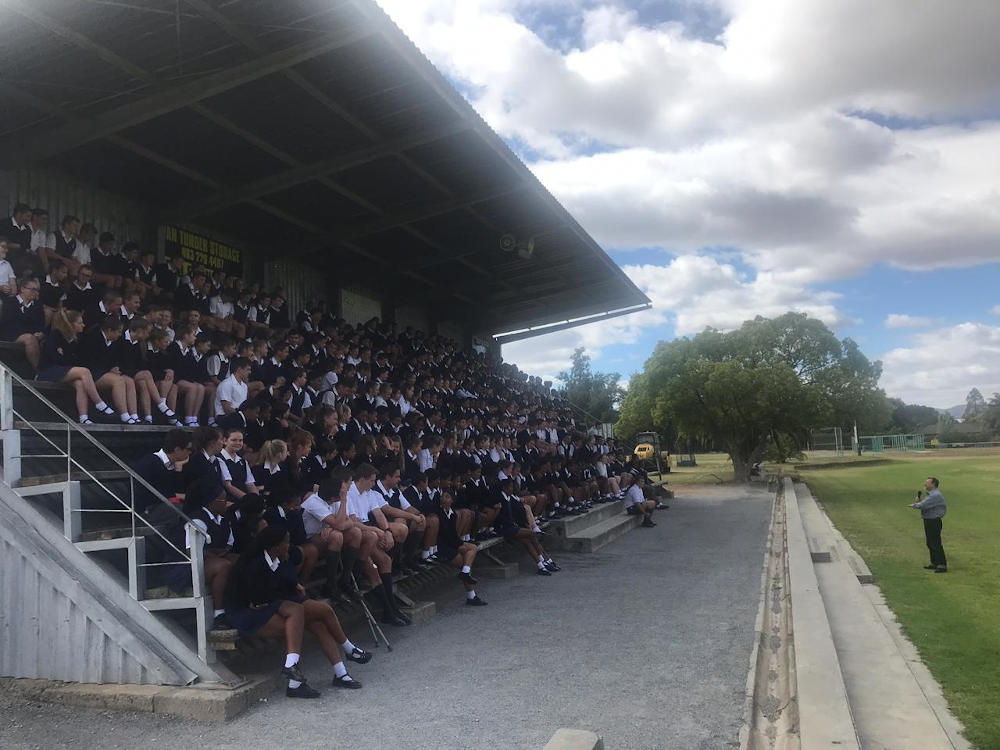 Robertson Secondary School where I addressed the learners on the pavilion. This was a beautiful occasion, as most of them responded positively. 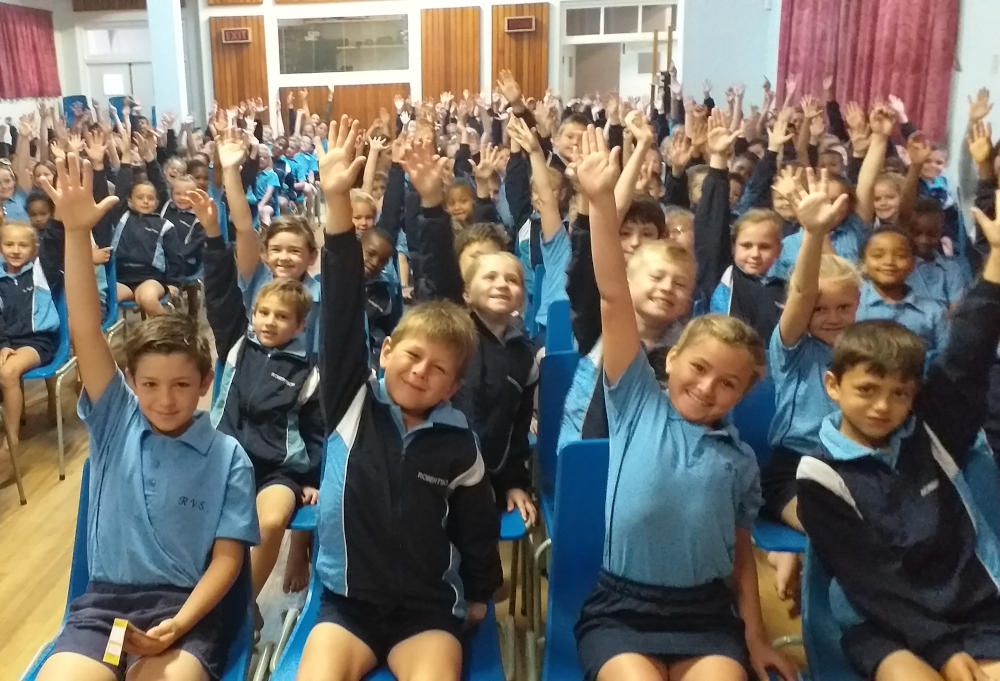 At Robertson Preparatory School I had the opportunity to speak to these beautiful youngsters. Although not used to act as if I am a pre-primary school teacher, the Lord again anointed my lips and my message was received favourably!

What can we do for you?

Fill in the form below.

We will get back to you as soon as possible.

TALK TO A MENTOR

Find our projects news and more

Copyright © 2019 There is Hope Ministries. All rights reserved. | Powered by WebBest